The size and shape of the nose is a crucial element of the general appearance. If a person doesn’t like his or her nose, it can affect life quality (constant dissatisfaction with oneself), and sometimes it may be a serious obstacle to perfect appearance.

Rhinoplasty can solve these problems. The consultation of a surgeon at the Gold Laser clinic will determine what a potential operation will look like. The doctor together with the patient model the patient’s new image.

Rhinoplasty is a surgery for the correction of the nose shape and is among three most popular plastic surgeries. Besides, whereas prices for rhinoplasty in Kyiv used to be exorbitant and this surgery was only affordable to rich people, nowadays this operation is affordable for ordinary people. There are many centers that do rhinoplasty in Kyiv, but it is the patient’s primary responsibility to choose the clinic and the doctor. 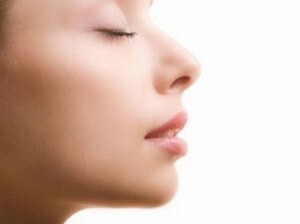 A wrong shape of the nose poses big psychological problems.
Therefore, indications for rhinoplasty include:

Rhinoplasty is most combined with septoplasty, or the correction of the nasal septum. The process of nasal breathing is also recovered if it was disrupted due to polyps or cysts in the nose.

Before the operation, the future nose shape is modelled on the computer, all aspects of the future manipulation are discussed, and all actions are coordinated with the patient. The doctor specifies the cost of rhinoplasty during the consultation.

Plastic nose surgery can be performed at any age because nasal structures grow after the surgery the same way as before. It means that the operation does not affect the growth of nasal bones and structures. The differences, advantages and disadvantages of the nasal surgery should be discussed in detail with the surgeon before the operation.

Rhinoplasty is contraindicated in the following cases:

Nasal correction will make you face symmetric thus raising your confidence and improving your image in general. Nasal breathing will be recovered completely. Rhinoplasty will ensure the following effects:

Immediately before rhinoplasty, the patient takes general and biochemical blood tests, urine test, ECG and allergic test for the tolerance of anesthetic drugs. Two weeks before the procedure, the administration of any coagulants should be discontinued to avoid profuse bleeding. During the preparation period, it is recommended not to take alcohol and nicotine. A day before the operation, switch to light food — cottage cheese, fruit, salads, and avoid eating or drinking anything six hours before the operation.

Rhinoplasty in Kyiv is performed using a closed technique that has an indisputable advantage of leaving no scars. All manipulations are done under endoscopic and CT control. The shape of the nose can be modelled in 3D before rhinoplasty.

During the plastic surgery, the surgeon makes cuts on the inner nose surface. Then the outer skin membrane is separated from the cartilage and bone and the deformed tissues are excised or shaped. In some cases, on the contrary, cartilage implants taken from the patient’s septum, auricles or ribs are inserted. A fixating splint and adhesive plaster are applied after all these manipulations.

The closed technique is low-invasive, preserves the supporting function of the nose and its columellar arteries. The use of a radio knife or laser further reduces the risk of complications, bruising, swelling or strong pain.

Rhinoplasty is often combined with septum correction. Due to injuries and other mechanical damage, this part of the nose often gets deflected and makes unattractive protrusions. In this case, the procedure involves the correction of the deflection and modelling of symmetric nose edges. As a rule, the shape of the nose is also changed following post-traumatic rhinoplasty because the deformed tissues are excised and fragments are bones and cartilages are repositioned.

On average, the operation lasts 30–60 minutes. In case of laser resection, all manipulations are performed on an ambulatory basis and last even shorter.

The rehabilitation period takes 7-10 days; swelling of the tissues may appear, but it passes after several days. The final effect of rhinoplasty becomes visible within 8-12 months.

Doctors recommend sleeping with a lifted head of the bed during the first days after the operation. Avoid eating very hot and very cold food for about 7 days. Also, try not to get physically or psychologically overloaded to prevent nasal bleeding.

The prices for rhinoplasty in Kyiv depend on the technique and scope of the operation. After you make an appointment, the surgeon of the Gold Laser clinic will determine the suitable type of manipulation and the cost of rhinoplasty.

Prices for rhinoplasty in Kyiv